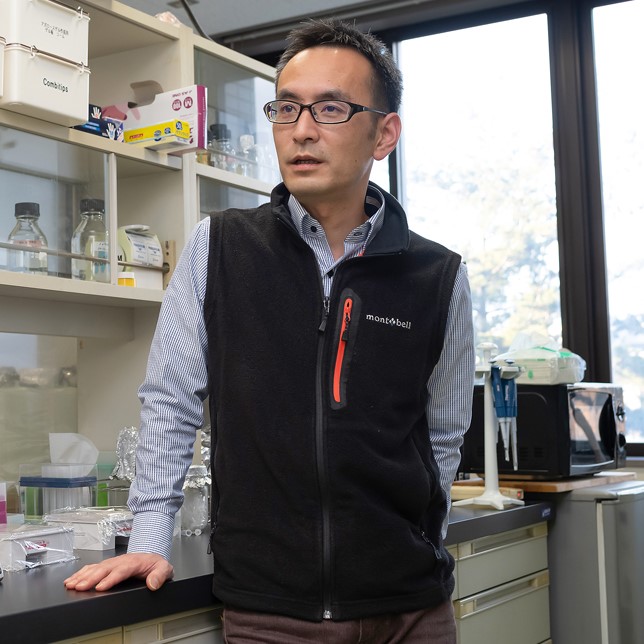 Microorganisms act on food in two ways: decomposition and fermentation. The difference between these is based on their impact on humans. Decomposition is harmful and renders food useless to humans, whereas fermentation is beneficial. The foods produced through the process of fermentation are called fermented foods.

Fermented foods include familiar seasonings such as soybean paste (miso), soy sauce, and vinegar, as well as fermented soybeans (natto), kimchi pickles, bread, cheese, yogurt, and other foods we eat on a daily basis. Fermented foods also include oolong tea and black tea. Dried fish is also classified as a type of fermented food, although the action of microorganisms is not involved. A little research will help you discover a large number of fermented foods.

Bacteria, yeasts, and molds are known microorganisms involved in fermentation. They exist everywhere on Earth, including the atmosphere, and live symbiotically with other organisms, including humans.

Associate Professor Masayuki Sugawara of Obihiro University of Agriculture and Veterinary Medicine (OUAVM) investigates the microorganisms involved in sake brewing, particularly lactic acid bacteria. He genially explains his research, “The basis of my current research on sake brewing was formed when I researched symbiotic microorganisms of plants in school. I realized the power of microorganisms that play a pivotal role in maintaining the global environment, supporting ecosystems and material recycling.”

“I primarily explore microorganisms in food with the goal of applying the power of microorganisms to food production. Part of my work is to study microorganisms used in sake brewing in collaboration with Hekiungura, a sake brewery established on our campus,” says Dr. Sugawara. He currently searches for lactic acid bacteria (microorganisms) that determine the taste of sake, using a sake brewing method known as Yamahai-shikomi. 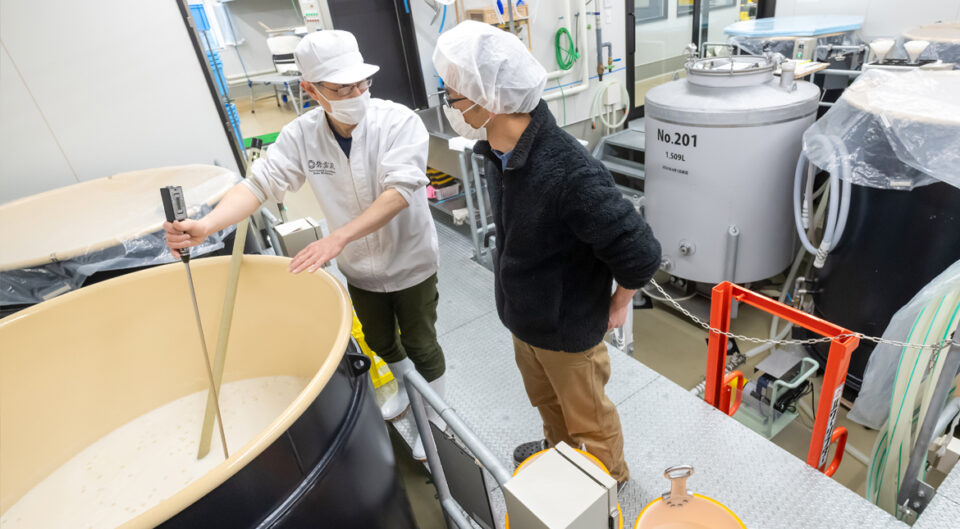 Please take a moment to get to know more about sake and sake brewing methods to understand why Dr. Sugawara, a microbiologist, has taken an interest in sake brewing.

Not only sake, but also beer and wine are brewed alcoholic beverages. Beer is made from barley, and wine from grapes. Alcoholic beverages are brewed when yeast converts the glucose (sugar) contained in the raw materials into alcohol and carbon dioxide. This process is called alcoholic fermentation. Yeasts are commonly found in nature, such as in the air as well as on plant surfaces.

Sake, which is made from rice, is brewed in almost exactly the same way as beer and wine, but there is one crucial difference.

The difference is that the yeast cannot convert starch, the main component of rice, because starch is a chain of sugars linked together. The starch molecules first have to be broken down by koji mold (Aspergillus oryzae).

There are several sake brewing methods based on different brewing processes. Dr. Sugawara and his team at Hekiungura focus on the traditional brewing method known as Yamahai-shikomi. With this method, the taste of the sake depends not only on the yeast and koji mold, but also on lactic acid bacteria. In other words, all of the aforementioned types of microorganisms involved in fermentation—bacteria, yeast, and mold—play a role in sake brewing by the Yamahai-shikomi method.

Dr. Sugawara remarks, “At Hekiungura, I work shoulder to shoulder with the sake brewers to brew an original OUAVM sake. Our goal is to control the brewing from a scientific perspective by analyzing the brewing microorganisms.”

What does “control the brewing from a scientific perspective” mean?

“Since sake is brewed in an open environment exposed to the outside air, the brewing process is vulnerable to contamination by unwanted microorganisms. The yeast productivity of alcohol and aromatic components are dependent on the complex brewing conditions. At the sake brewery, therefore, professional brewers draw on their experience to determine the timing of environmental control to minimize the risk of contamination by unwanted microorganisms and to make the most of the action of the yeast,” says Dr. Sugawara. His remarks conjure up a world of craftsmanship.

“I would like to scientifically analyze the timing to allow control of the brewing process from a scientific perspective, because scientific control of brewing allows the brewing of a sake with stable quality. While sake has long been researched, we are working to gain deeper insight into the nature of microorganisms involved in sake brewing using an approach based on cutting-edge scientific analyses,” says Dr. Sugawara. He then passionately expressed his desire to brew an original OUAVM sake in collaboration with the sake brewers and students in his lab.

He remarks, “Since the brewery is newly constructed, the shubo contains many lactic acid bacteria that are different from those that are usually involved in sake brewing. The great variety came as a surprise. I’m confident that we will identify more microorganisms that grow at low temperatures and more lactic acid bacteria suited for sake brewing in the future. I’m looking forward to finding them.”

Dr. Sugawara also stresses that there are many challenges he hopes to work on going forward.

“Although researchers have made significant headway in trying to shed light on the strains of lactic acid bacteria involved in sake brewing, the exact roles and the brewing processes in which the various strains exert those roles remain unclear. Therefore, my students and I are working to elucidate these dynamics.”

He adds, “I also hope to study how sake lees (kasu), a by-product of sake brewing, can be utilized. I’m considering its use as a plant fertilizer, for example, wondering what substances and components are effective for plant growth. Although sake lees is often viewed as a waste, I believe that finding uses for it will encourage farmers to utilize it.”

It is believed that fermented foods already existed around 10,000 years ago, the prehistoric Jomon period, in Japan. Thinking about microorganisms, fermentation, and sake—the key words of Dr. Sugawara’s research—evokes awe for the seriousness and sincerity with which our forerunners were able to differentiate between decomposition and fermentation, and applied that knowledge to food. Suppose you have stored precious food, regardless of whether intending to enhance the taste and nutritional value or to brew alcoholic beverages. If fermentation has made it mushy or even frothy, would you try and taste it to see if it is still edible?

Therefore, taking direct action to solve the question of edibility may serve as an essential first step to any scientific inquiry. As we stretch our imagination, we can be fascinated by the “dramas” involving microorganisms and fermentation.