In addition to motivating freshmen at OUAVM to develop a broad understanding of the liberal arts to pursue study and research, the event, open to the public, was also intended to provide local residents with an opportunity for lifelong learning and exchanges with OUAVM.

At the outset of the lecture meeting, OUAVM President Kiyoshi Okuda delivered an address, stressing that the lecture on fundamental physics, wholly different from the fields of study covered by the University (i.e., agriculture and veterinary medicine), would be a great opportunity for OUAVM students to become inquisitive about interdisciplinary fields.

Dr. Kobayashi talked for approximately an hour regarding the history and appeal of particle physics, talking about how theoretically each fundamental particle of matter has an equivalent antimatter particle, as well as the mystery of the origins of the universe.

During the Q&A session that followed, Dr. Kobayashi answered questions from freshmen and many other audience members. He encouraged a student who asked a question to study hard in his field of specialization at college because there are endless things to learn there.

The event attracted some 1,300 people, including OUAVM students and teaching staff as well as local residents. It gave the audience a rare and valuable opportunity to learn about elementary particles, the key to continuing research, and more.

On the morning of the next day, April 11, President Okuda took Dr. Kobayashi to facilities on campus, including the Large Animal Hospital and Clinical Research Building and the National Research Center for Protozoan Diseases. 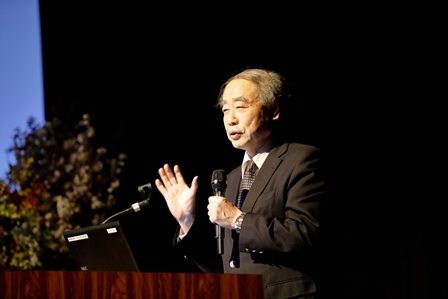 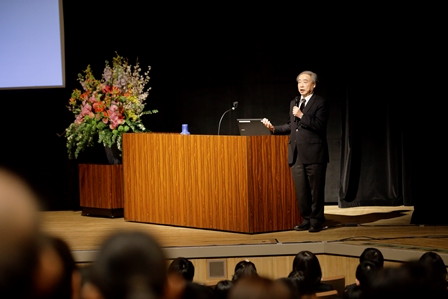 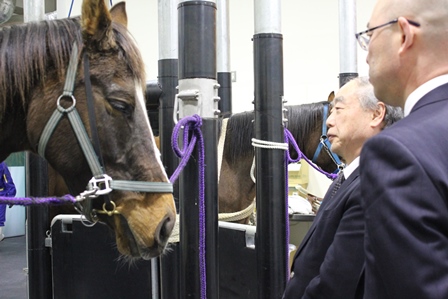 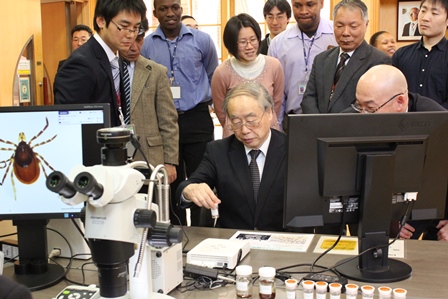 Dr. Kobayashi listens to explanations at the National Research Center for Protozoan Diseases.