The Obihiro University of Agriculture and Veterinary Medicine (OUAVM) held a debriefing session featuring two OUAVM students who returned from the Tobitate! (Leap for Tomorrow) Young Ambassador Program, an overseas study support program based on private and public partnerships. The event was held at an OUAVM meeting room on May 2, 2017. Sharing their experiences were Koki Matsushita, in the first year of a doctoral course of the United Graduate School of Agricultural Sciences, Iwate University (UGAS), and Shigehiko Tsuruga, a senior at the School of Agriculture.

Mr. Matsushita shared his experience of attending lectures and learning about cutting-edge research in food science at the University of Wisconsin-Madison from April 2016 through February 2017. He also talked about his involvement in the development of cookies containing locally sourced powdered small fish at the Jomo Kenyatta University of Agriculture and Technology in Kenya.

Mr. Tsuruga stayed in Duc Trong District in Lam Dong Province, Vietnam, from late August 2016 through February 2017. He shared the experiences, including difficulties, he had when he conducted local residents’ attitude survey on food hygiene and taught Japanese to local residents at school.

Outlining the characteristics of the countries where they studied, including the food locals enjoy, Mr. Matsushita and Mr. Tsuruga encouraged the audience to participate in the program, which offers the opportunity to encounter other cultures.

The event, which attracted about 20 students, was followed by a social event with the speakers. 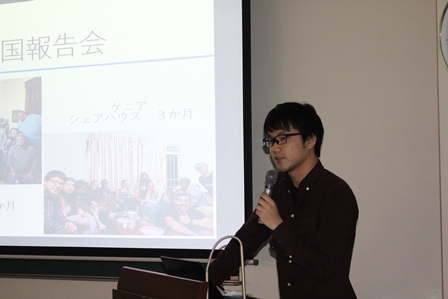 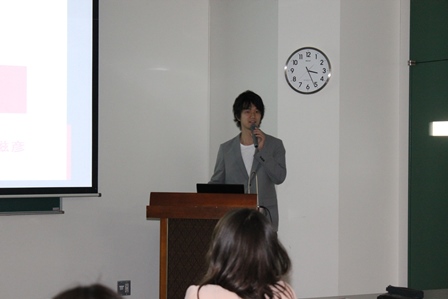