Obihiro University of Agriculture and Veterinary Medicine (OUAVM) President Kiyoshi Okuda and Executive Vice President Noboru Inoue announced in a March 28, 2017, press conference held at an OUAVM meeting room that the National Research Center for Protozoan Diseases (NRCPD) and the Diagnostic Center for Animal Health and Food Safety received the ISO/IEC17025: 2005 certification, an international standard for the competence of testing and calibration laboratories.

ISO/IEC 17025 is a system under which an authoritative third-party certifying body accredits a laboratory as having the competence to produce consistently accurate test results.

The accreditation was granted to NRCPD for “protozoan DNA testing of bovine babesiosis, equine piroplasmosis and Surra by PCR methods in accordance with the OIE Manual of Diagnostic Tests and Vaccines for Terrestrial Animals (2016).” The testing is among the animal disease diagnosis (definitive diagnosis) NRCPD performs as the world’s only OIE collaborating center and reference laboratory in the field of protozoan diseases.
The accreditation was granted to the Diagnostic Center for Animal Health and Food Safety for “aerobic plate count testing in foods in accordance with Standard Methods of Analysis in Food Safety Regulation (Microbiological).” The testing is performed based on contracts to ensure food safety “from the farm to the table” by the Center in its roles as an on-campus testing facility and an education and research center to deal with hazards that may arise from the production, distribution and consumption of livestock products.

Dr. Inoue addressed his plan to use the centers’ internationally recognized competence in testing in education and research programs and in efforts to contribute to the development of society and local industries as pioneers in the fields. 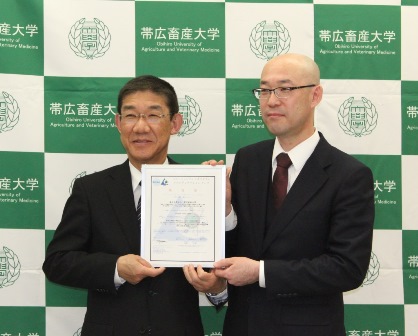