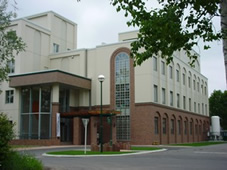 The National Research Center for Protozoan Diseases (NRCPD) was established in 2000, and holds the distinction of being the only research-based facility of its kind among veterinary and agricultural universities in Japan. The NRCPD has cooperated with domestic and foreign universities, research institutes and relevant ministries as part of its role as the only MEXT Joint Usage Research Center of Protozoan Diseases in Japan. This has led to academic contributions to the effective control of protozoan diseases around the world. The global recognition of these contributions resulted in the designation of two of our research groups – one into bovine babesiosis and horse piroplasmosis, the other into surra – as OIE (World Organization for Animal Health) Reference Laboratories in 2007. In the following year the center was designated as an OIE Collaborating Centre in the field of protozoan diseases, the first in Asia.

It is an important global issue to establish countermeasures for protozoan diseases, with these including the development of novel diagnostic techniques, improved prevention, and effective treatments that resolve the present situation. Furthermore, as was proposed at the World Food Summit, the control of protozoan diseases is also an important issue in the improvement of livestock productivity and thus the eradication of starvation and malnutrition and improvement of food safety and security. Since its establishment, our research center has consistently provided training and performed research ranging from basic to advanced levels. Our mission is to use the global network of researchers to promote research into protozoan diseases, with this including international field research as well as advanced fundamental research. In addition, we aim to contribute to the promotion of the livestock industry and human health and welfare around the world by providing leadership as an international joint research center.