OUAVM established the Research Center for Global Agromedicine in FY 2015, and subsequently entered into academic exchange agreements with Cornell University and the University of Wisconsin in the U.S. to promote international collaboration, deepen individual inter-university exchanges and strengthen its capacity in the fields of veterinary medicine and agricultural science.

Nakagun, who attended AQUAVET Ⅱ, reported having spent his days at Cornell attending lectures and practical training on pathology for aquatic animals under the program. This was in contrast to last year’s AQUAVET I (also attended by Nakagun), which was a more general program with opportunities to visit aquatic animal rearing and research facilities. Nakagun also said that the Cornell training had been fulfilling and allowed time out from the busy schedule to enjoy spending time with other students. Finally, he added that the greatest asset for him in his ambition to be a researcher had been the opportunity for networking with other students and instructors on the program.

Kaoru Hatate who attended the six-week Summer Dairy Institute program, highlighted its focus on farm management and the requirement for U.S. veterinarians to have management skills in addition to the capacity for medical care.

Hatate also reported on the Case Farm Project, in which students paid farm visits in groups. She said that by the final day she had been able to identify improvements in hygiene based on what she had learned on the program, and that she had been encouraged by the owner’s positive response to this. As advice to students considering the program, Hatate observed that she had often been asked to share her thoughts, and that English and communication skills were therefore important.

OUAVM plans to apply feedback from these two students in its provision of education. 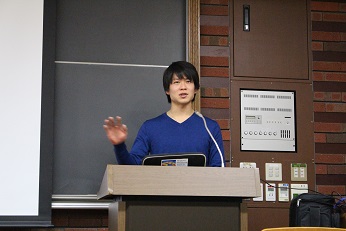 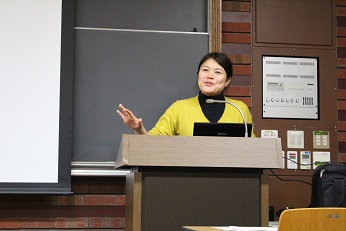