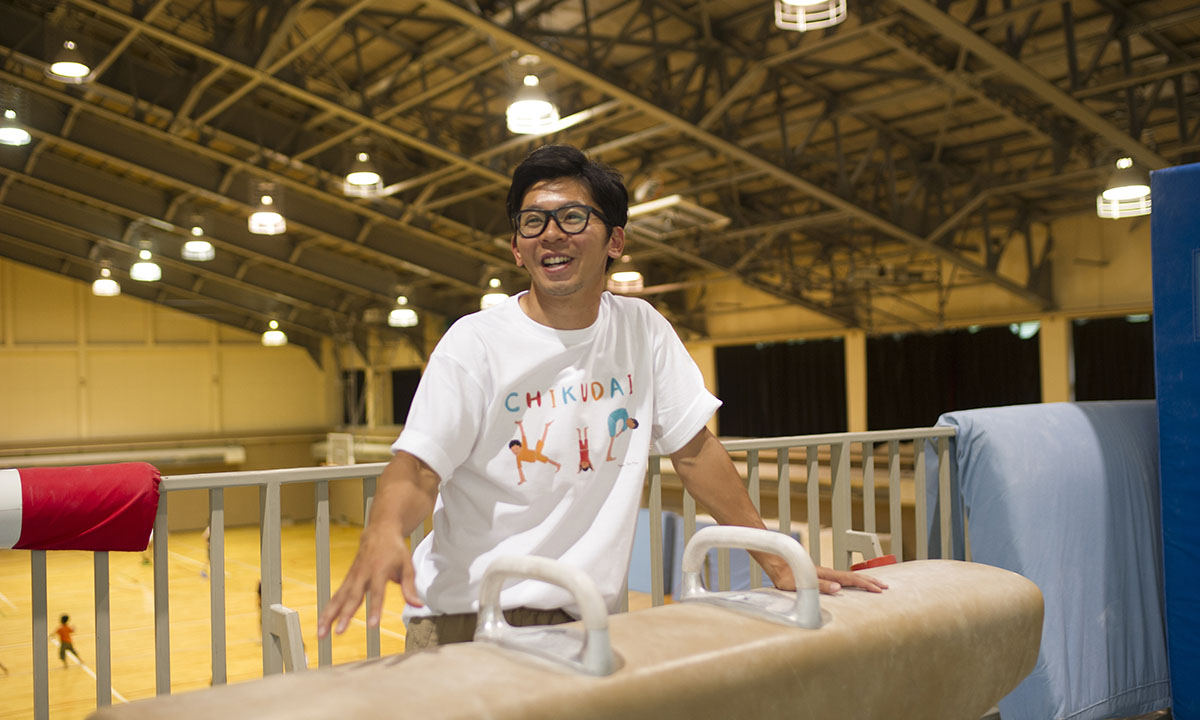 “In a gymnastics competition, you’ll lose points if you fail in even one of the hundred gymnastics skills you demonstrate,” Associate Professor Koichiro Murata says. “All you can do to perfect your routine is to learn from your failures. Experience like this that I’ve gained through gymnastics has significantly influenced my life,”

While pursuing graduate studies on biomechanics, which he has continued since he was an undergraduate student, he has taught gymnastics in a local community. He was gradually shaping his dream of making a living by teaching sports. In reality, he realized that money problems were threatening the continuation of his activities as a gymnastics instructor. What he wanted to create was a community-based organization that would enable people to become healthy while having fun and that could be operated as a profitable business. His idea was realized by the establishment of Chikudai KIP in 2015. Chikudai KIP is categorized as a “comprehensive community-based organization,” which is a new coinage from the idea of “comprehensive community sports clubs” promoted by the Ministry of Education, Culture, Sports, Science and Technology. Its operation is not limited to sports. Operating this community-based training facility is a research activity for Associate Professor Murata.

When he applied for a job as a gym instructor at Obihiro University of Agriculture and Veterinary Medicine in 2009, he was told clearly in the job interview that it would be impossible for him to continue his studies if he took the job at the university. In response, he made it clear that he would be starting something new. Immediately after he started working at the university, he invited a gymnastics gold medalist from the Athens Olympics with whom he was friendly to an event that he was holding. Tomohiko Yamada, who was then a student at the university, became fascinated with gymnastics and established a gymnastics club at the university. The club started with 11 members, but none of them had gymnastics experience and there was no gymnastics equipment in the club. Under such unfavorable conditions, Associate Professor Murata instructed the members to work out in preparation for gymnastics practice. After a year of training, the club members participated in their first competition. Although they were unable to achieve high ranks, the fact that they took on the challenge of participating in the competition made them proud of themselves.

In 2015, Associate Professor Murata’s long-cherished dream came true: Chikudai KIP was launched, with Associate Professor Murata as an executive board member and Mr. Yamada, who had grown from a seminar student to the associate professor’s right-hand man, as the representative of Chikudai KIP. A kip is a difficult gymnastics move for mounting the bar. Chikudai KIP was named in the hope that the members would be able to enjoy a sense of achievement through the process of mastering kips. It is also hoped that mastering kips will allow members to experience the excitement of being able to enjoy a new expanded view from the bar when they mount it with a kip.

“KIP’s theme as a community is ‘the overflowing motivation that comes from the excitement of being connected to others’,” Assistant Professor Murata says. “It was decided that we should implement programs in line with this philosophy. KIP’s main project is the provision of gymnastics classes during hours when the university’s physical education lectures are not given. Currently, 250 members aged 1 to 12 years are enjoying gymnastics in three programs: Family Gym, designed for children of preschool age and younger and their mothers; Kinder, designed for kindergarteners; and Junior, designed for elementary school students. Membership has been increasing thanks to the latent demand for gymnastics as an after-school activity, the staff’s enthusiastic coaching, the attractive program and the sense of reliability that Obihiro University of Agriculture and Veterinary Medicine offers.” Children who want to learn more advanced gymnastics skills can be transferred to the Tokachi Junior Gymnastics Club, which has a long history of supporting the gymnastics community in Tokachi. KIP instructors also teach at that club, which has produced Hokkaido junior high school and high school champions.

“Two full-time staff work at KIP,” Assistant Professor Murata says. “One is Mr. Yamada, who represents KIP, and the other is Mr. Matsubayashi, who was a gymnastics champion in Hokkaido. It isn’t easy to make a living from teaching sports, and it’s important for talented people to find a job in their local communities. Coaching local children and pursuing the same dream together will increase the level of fulfillment for people in the community. I find my work rewarding, as KIP creates job opportunities.” 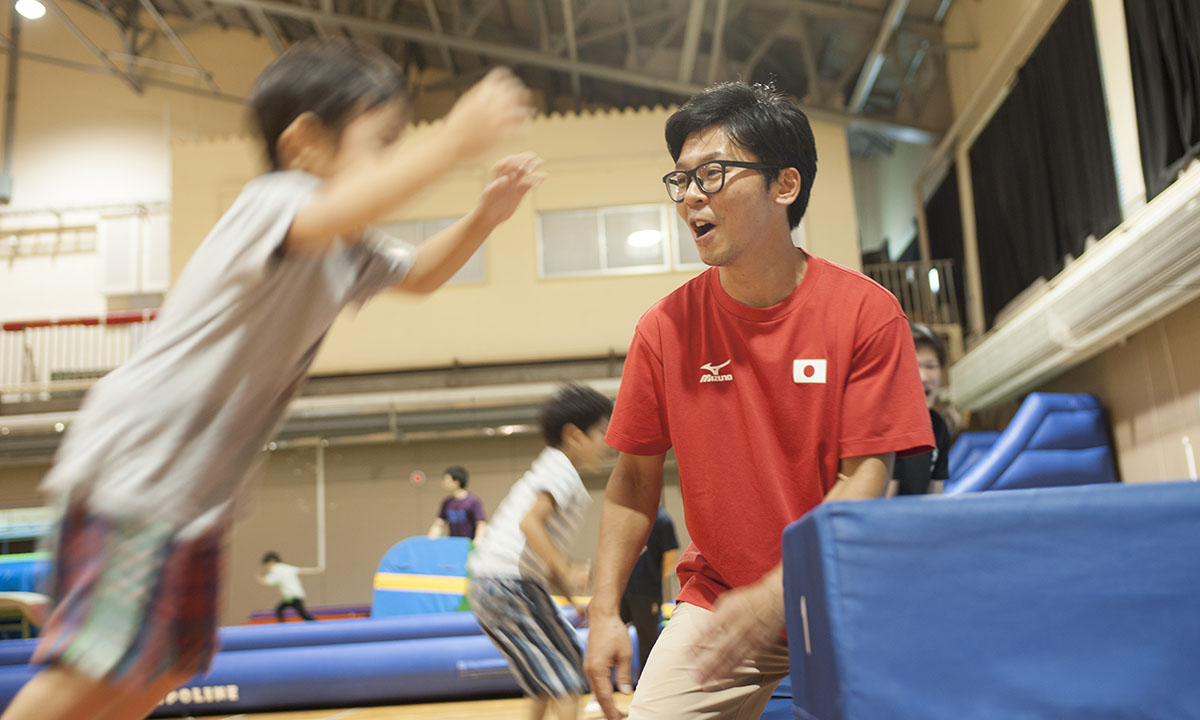 Another major project that KIP is involved in is KIP Students, which allows students to plan businesses that are expected to contribute to the community. The first project was planned to attract people to a local bowling alley that had only a few customers. When the High Bowl high school student bowling competition was planned with a prize of a trip to a theme park, 61 teams participated. In 2016, a centralized management system for part-time farm work won the first prize among 2016 Business Plan Presentation Meeting of Four Universities in Northern Japan. For this plan, system development has started with support from businesses.

“From now on, we’ll be focusing on developing a program of physical activities for children with developmental disorders,” Associate Professor Murata says. “Children who tend to avoid physical activities are prone to health problems in the near future. We’ll develop a program that can help children have fun through physical activity, in which exercise is used as a tool to allow children to come face-to-face with themselves. The goal of my studies is to contribute to society in a simple way by offering what’s demanded now while reading the trends of the times. I’ll make efforts to inspire people, incorporating playful elements based on my philosophy of being able to learn only through failure.”