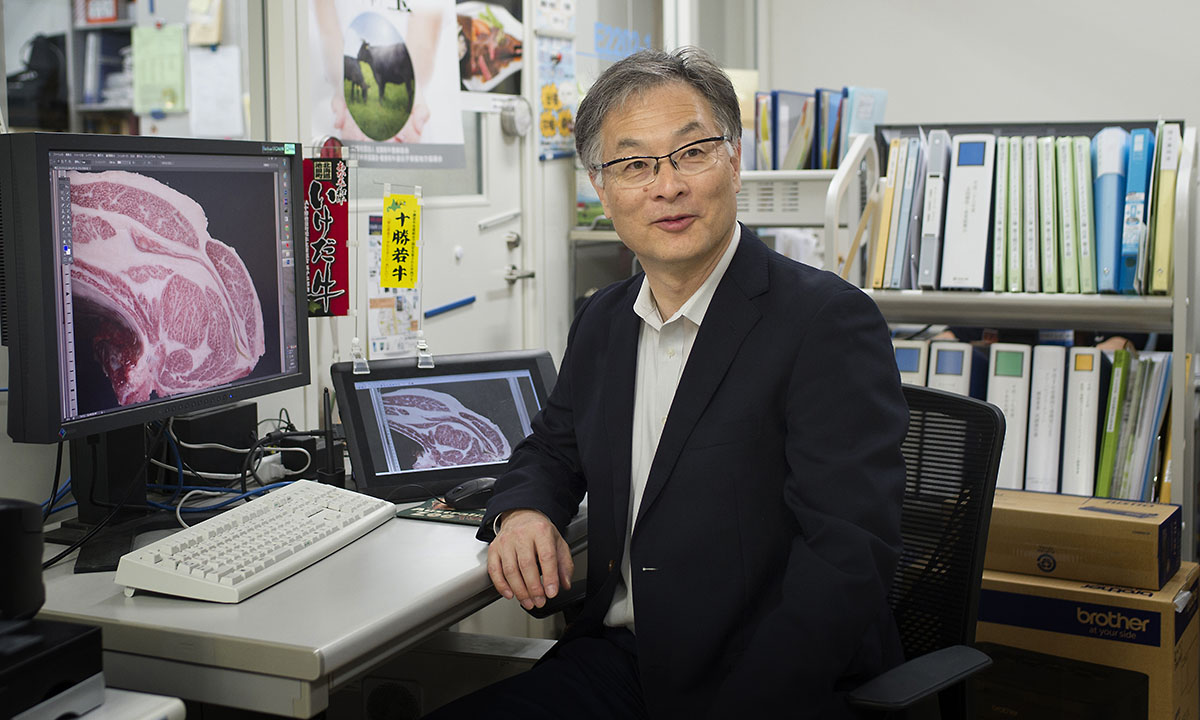 To many Japanese, delicious Wagyu beef means well-marbled beef. For the nearly 30 years since he was a student, Professor Kuchida has devoted himself to studying how to objectively evaluate marbling (meat interspersed with fat).

Professor Kuchida recalls, “This study was started when I came up with the idea of using a computer program to analyze images. Back in those days, data were analyzed at a computer center and images were created using a large drum scanner before being printed. My research would never have been successful without the rapid progress in optical devices.”

The professor has been involved in developing a more sensitive photographic device. His efforts have yielded a photographic device with a mirror and built in LEDs, which was developed in 2005. This device has a mechanism that allows images of carcass cross-sections to be captured from directly above using the reflection of a mirror attached to the inner side of a hood that is angled on one side and is as tall as a PET bottle on the other side. As the hood is angled, the photographic device can be inserted between carcass cross section surfaces without damaging the carcass. This enables images of uniform quality to be obtained consistently under the same conditions.

Looking into the future, the professor says, “The camera used for the first version of the device was able to take 13.5-million-pixel images, but it’s been replaced by the third version, which can acquire 36-million-pixel images. The Japan Meat Grading Association inspects meat visually for grading. The photographic device is expected to serve as a useful tool for grading, because it will improve the accuracy of grading.” The association’s meat grading is based on marbling, meat color and brightness, meat firmness and texture, and fat color and quality. The human eye is said to have a resolution of seven to eight million pixels. There is an obvious difference between the human eye and the photographic device with mirror.

Professor Kuchida takes his device with him dozens of times a year when he visits slaughter facilities in Obihiro to obtain images of several thousands of carcass cross-sections. Analysis software is used to numerically evaluate the marbling percentage, the fineness/coarseness of marbling, the rib-eye shape and other characteristics. Vast amounts of detailed data have been accumulated.

Images of marbled meat taken by Professor Kuchida with his photographic device with mirror are used by the Japanese Meat Grading Association as index images.

The goal of Professor Kuchida’s study is to introduce the photographic device he developed to meat evaluation around the world, including Japan, and to establish a new meat quality evaluation method that enables palatability, such as juiciness and tenderness, to be objectively evaluated.

“Using Tokachi Wakaushi®®, a brand of beef that’s produced in the town of Shimizu in the Tokachi region, as an evaluation indicator, the meat palatability evaluation method is almost complete. At slaughter facilities, images of carcasses are taken every day and each carcass is sampled to evaluate its palatability. Our photographic device was introduced in 2012, and images from nearly 10,000 head of cattle have been acquired. Furthermore, meat images, palatability evaluation results, production records and other parameters have been examined since 2014, and the results have been combined to identify the characteristics of juicy and tender meat. Consequently, the relationship between them has been clarified. It’s difficult to evaluate palatability, as everyone has a different taste in food, but juiciness and tenderness are both sensory characteristics that tend to be preferred. It’s been found that, as far as Tokachi Wakaushi® beef is concerned, the darker the meat, the lower the palatability. We’re thinking of introducing an optical sensor so that carcass conditions can be checked for the quantification of palatability,” the professor says.

This approach is sure to revolutionize meat quality evaluation. 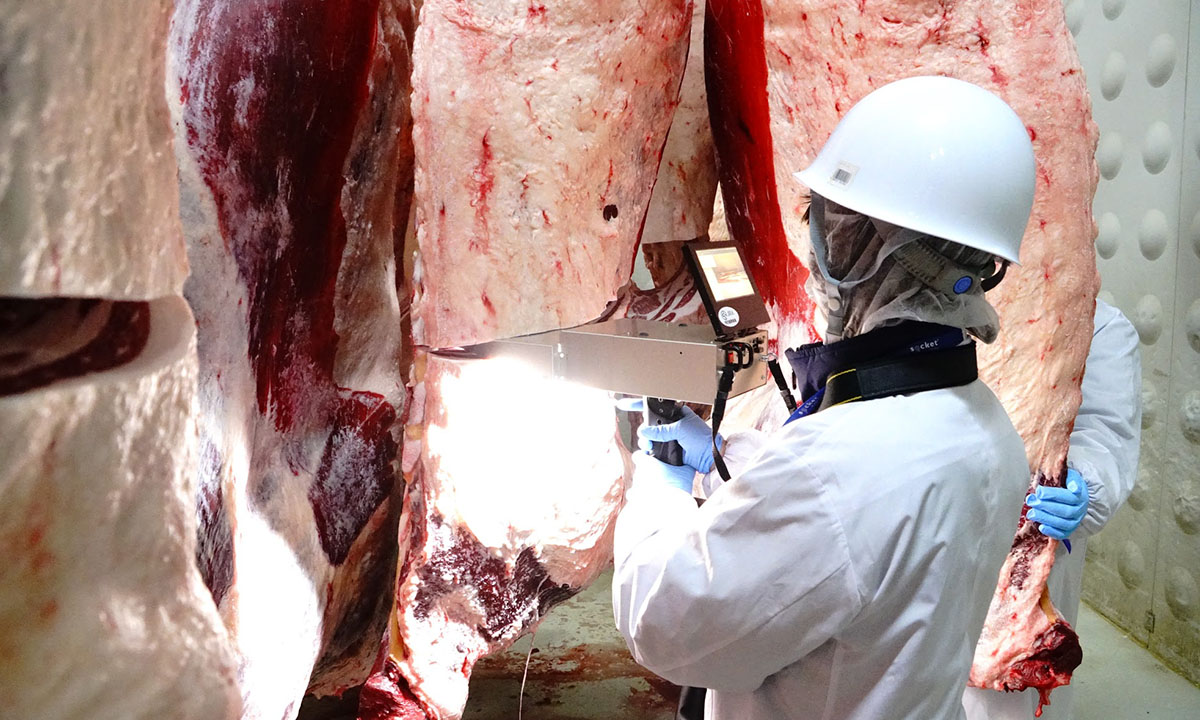 In 2014, Professor Kuchida founded Meat Image Japan, a general incorporated association, in the Incubation Office of Obihiro University of Agriculture and Veterinary Medicine. The goal of Meat Image Japan is to establish meat evaluation standards that can address the globalization of meat distribution, with a main focus on three areas: the development of a camera capable of acquiring images in the narrow spaces between the cut surfaces of a carcass, the implementation of cloud-based livestock management that enables us to analyze lifelong data of cattle, and the expansion of markets taking the advantage of the eating quality traits of Tokachi Wakaushi® beef.

Professor Kuchida is confident of the success of his camera, which is under development. “We receive subsidies from the Japan Racing Association (JRA) through a livestock industry promotion project for our camera development. In fact, 95% of beef carcasses on the market have a narrow incision opening, and there’s a demand for a photographic device that fits such a narrow opening. The latest version of our device has a hood angle of 15 degrees and is approximately one-third the weight of the one with a mirror. Because the image data are instantly transmitted to a server, marbling and other analytical values can be obtained within 20 seconds. The latest version of our camera is in the final stage of development. The technology used for this device is attracting worldwide attention. Three cameras are being produced for shipment to Australia, where marbling has a significant influence on the meat grade. We’ve also received an inquiry from South Korea.”

Despite being busy with his work as a professor, researcher and businessman, Professor Kuchida chairs the steering committee for the Japan Intercollegiate Meat Judging Competition. In 2017, Obihiro University of Agriculture and Veterinary Medicine took first place in the intercollegiate competition, becoming Japan’s top college in the field of meat evaluation.

Even in his private life, Professor Kuchida, who spends a large amount of his work hours with beef, cannot be separated from beef. It seems that his quest for palatability never ends. Whenever it is on the menu, he chooses beef over other meat options. Once, when asked about the most delicious beef he had ever tasted, he answered smilingly, “It’s not just marbled beef. I like juicy lean meat too. I can’t decide which to choose.”