When providing veterinary care to farm animals, advanced medical equipment is rarely used, because such equipment is large and expensive. In practical settings, veterinarians treat sick farm animals by judging their conditions mostly based on the findings of physical examinations. Under such circumstances, the underlying disease often ends up not being accurately identified. In light of the above, Professor Hisashi Inokuma is working to develop methods of analyzing the pathology of internal diseases in farm animals and readily diagnosing such diseases, instead of relying on the experience of individual veterinarians. The professor’s study focuses on hematological, cardiovascular and neurological diseases, because these diseases are difficult to clinically diagnose while the animal is alive.

“Bovine leukosis is a viral malignant neoplastic disease whose incidence has more than tripled in the last ten years,” Professor Inokuma says. “Most animals infected with bovine leukemia virus are asymptomatic. In addition, bovine leukosis is designated as a notifiable infectious disease, but not as an infectious disease in which the isolation of infected animals and the disinfection of contaminated areas are legally required. This keeps preventive measures from being put in place and contributes to the spread of the disease. In cases of atypical bovine leukosis, where the infected animals don’t develop lymphoadenopathy or other symptoms, the leukemia can’t be diagnosed until the animals are slaughtered for beef. The carcasses of animals with bovine leukosis must be disposed of. As a result, the farmer suffers tremendous losses from foregone profits. In light of this, we started to search for tumor onset markers that could be used for diagnosing bovine leukosis in live animals, and we discovered that serum thymidine kinase activity and some specific genes are useful for diagnostic markers. These markers have been introduced in practical settings but not in routine examinations, because testing for them is costly.”

In 2015, the professor started to study leukosis in young cattle, which has been on the rise. Now, he’s collecting data to determine whether there are any genetic differences between cattle that are infected with the bovine leukosis virus at three years of age or older and those infected at a younger age. Furthermore, it’s been hypothesized that animal genes are influenced by feed and other aspects of the farm environment. The idea is to test whether epigenetics are involved in the pathogenesis*.

In cattle, neurological diseases whose common symptoms are the inability to stand or walk are considered to be caused by brain or spinal cord inflammation or tumors, intoxication, metabolic disorders, malnutrition or other factors. However, it’s impossible to make definitive diagnoses for such farm animals until they’re autopsied, because MRI, CT and other advanced diagnostic facilities are unavailable.

“We’re working to establish a systematic diagnostic method towards solving the problem we currently face that clinical findings are not linked to a definitive diagnosis,” the professor says. “Our university is accumulating clinical and pathological data in cooperation with a laboratory of veterinary pathology that’s actively addressing diseases in large animals. And the university has been investigating diagnostic markers so that diagnoses can be made by using the blood, cerebrospinal fluid and other accessible bodily materials of living animals.” He optimistically adds, “The establishment of diagnostic markers is expected to lead to the development of prognostic diagnosis that would be useful in decision-making, for example, on whether treatment should be provided or spontaneous recovery can be expected.”

As part of his life’s work, the professor has also dedicated himself to the study of tick-borne infections. Anaplasma phagocytophilum (hereinafter: “Anaplasma”) is a newly identified pathogen, and much about it remains unknown. The existence of the Anaplasma bacterium in Japan was confirmed approximately ten years ago.

“It’s been known in Europe that humans and dogs, in addition to horses and cows, can be infected with Anaplasma, so I was interested in whether this was the case in Japan,” the professor says. “This is why I started to research Anaplasma. Although the existence of this pathogen has been known, there had been no recorded cases of anaplasmosis in Japan until 2014, when the university received a report of anaplasmosis in dogs in Tsukuba City, Ibaraki. Consequently, epidemiological research is being conducted to determine the number of the dogs infected, the species of tick that transmitted the pathogen, and other details. Based on DNA analysis, the pathogen was shown to be related to one in South Korea and China, but common features shared by dogs carrying Anaplasma have not been found and the species of vector ticks remain unknown. We’re in the process of identifying the route of infection.” 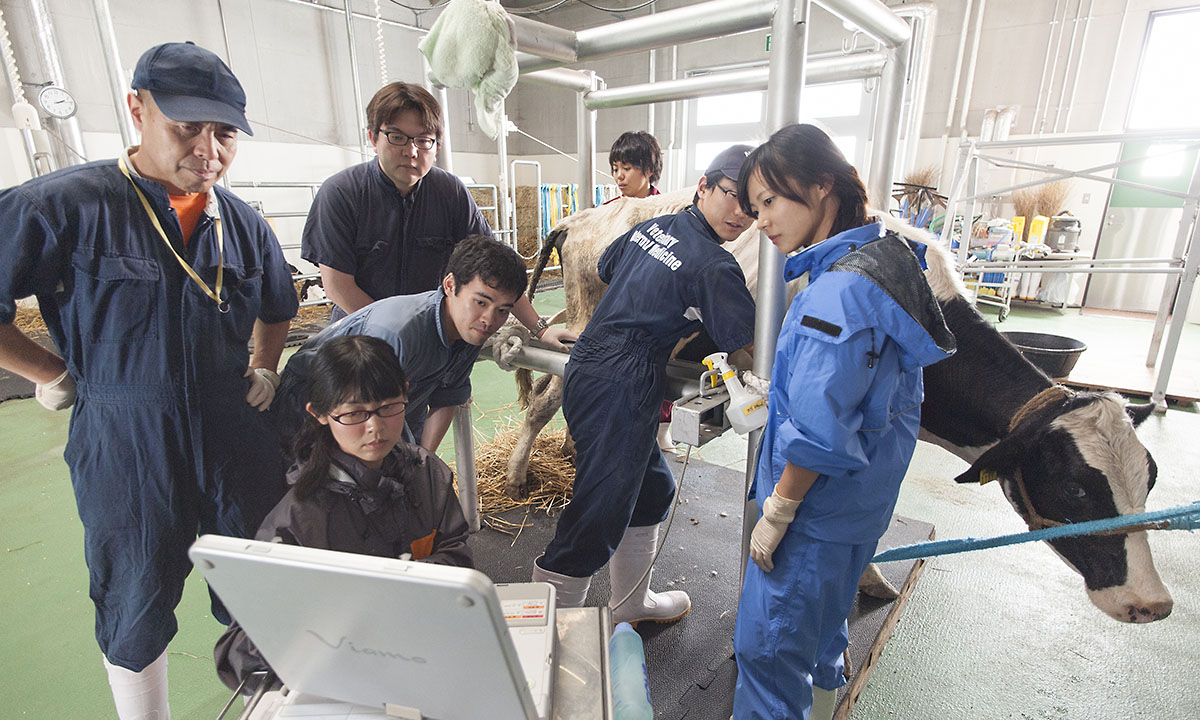 In principle, patient cattle are transported to the university for detailed examination that can’t be performed on farms. The university accepts approximately 100 or more cattle patients each year.

“In the Tokachi region, whose approximately 400,000 head of cattle outnumber the human population, we sometimes encounter rare diseases in cattle that can be only seen in textbooks,” says Professor Inokuma. “This advantageous location is an attractive feature of the university.”

The driving force behind the professor’s research is his aspiration to increase diagnostic accuracy in veterinary medicine and to make veterinary science more accurate and detailed. As an educator, he maintains the same approach. In clinical clerkship, the professor uses diseased animals to instruct students on how to make logical, evidence-based diagnoses. Students express their views on possible diagnoses based on the results of basic examinations and other data. If the students’ diagnoses conflict with the autopsy, the professor has the students give thorough thought to identify the reasons behind such divergence. As there are a few research papers on large animals, the professor encourages students to present research results at conferences and to submit research papers to journals.

“A researcher’s tasks include publishing new findings,” he says. “It’s exciting when new findings disprove old scientific explanations and textbooks need to be revised,” the professor says, his mouth breaking into a smile, “and when new findings contribute to the vitalization of the livestock industry in Japan.”