Bovine piroplasmosis (bovine theileriosis and babesiosis) caused by species of genera Babesia and Theileria, is characterized by fever and anemia. The disease usually results in severe economic losses in cattle industry worldwide. However, preventive and control measures against bovine piroplasmosis have often been ineffective. With an ultimate aim of minimizing the incidence of bovine piroplasmosis, we conduct research to 1) determine the current status of bovine piroplasmosis in Japan and other endemic countries; 2) identify tick vectors transmitting bovine Theileria, and thereby establish systematic tick-control measures; 3) determine immunological responses against Theileria infection in cattle and develop vaccine; 4) clarify the mechanisms by which Babesia invades erythrocytes with the objective of vaccine development; 5) establish effective techniques and tools to analyze the genetic polymorphism in vaccine candidate antigens; and 6) develop made-to-order type subunit vaccines effective in different endemic regions. To expedite our aim of eliminating bovine piroplasmosis, we maintain a strong international collaborative network and accept postgraduate students and young postdoctoral researchers for the development of human resources in countries where bovine piroplasmosis is endemic.

Epidemiological surveys (buffaloes in Thailand, cattle in Mongolia and Vietnam)

Certain infectious diseases such as malaria, sleeping sickness, Japanese encephalitis, and filariasis are transmitted by arthropods. The transmission of these infectious diseases requires “vectors”. In other words, if the vector stage is cut off, infections of animals and humans can be avoided. Based on this concept, we raise the following questions: How do etiological agents behave within vectors? How do a vector and an etiological agent interact with each other? What are etiological agents to vectors in the first place? We are researching the items above in an effort to achieve the suppression of protozoan diseases by controlling the vector stage. We systematically integrate a wide range of information, from data generated by basic laboratory experiments to field research in endemic areas, as well as thoroughly analyzing unique life phenomena caused by the relationship between such etiological agents and vectors. 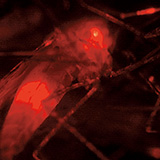 Developmental-stage conversion (or cell differentiation) is essential for trypanosomes to parasitize mammalian hosts and vectors. Therefore, we aim to reveal the stage conversion mechanisms using gene manipulation technology, with the aim of developing new control strategies for trypanosomoses.

We aim to establish effective control strategies for trypanosomoses in endemic countries based on field surveillance data. In addition, we intend to isolate and establish field strains of trypanosomes for further study.

Toxoplasmosis is a zoonotic disease latently infecting 20% to 30% of the world’s population. Toxoplasma causes serious problems in immune-suppressed people such as HIV patients and the elderly as well as in congenitally infected infants. This laboratory is working on unraveling the mechanism of Toxoplasma’s parasitism in hosts.

The main focus of this lab is to elucidate the host defense mechanisms against protozoan diseases, and to develop medical agents and recombinant vaccines that could efficiently stimulate the host protective immunity.

Babesia and Plasmodium parasites are intraerythrocytic apicomplexan protozoans which cause sever morbidity and mortality to the animals and humans in the world. These parasites invade into the host erythrocytes and extensively modify structural and mechanical properties of the erythrocytes. To find a way to control babesiosis and malaria, we are studying on invasion and host erythrocyte modification mechanisms of the parasites by using genome manipulation techniques. Furthermore, we are performing field epidemiology of protozoan diseases.