Bovine piroplasmosis (bovine theileriosis and babesiosis) caused by species of genera Babesia and Theileria, is characterized by fever and anemia. The disease usually results in severe economic losses in cattle industry worldwide. However, preventive and control measures against bovine piroplasmosis have often been ineffective. With an ultimate aim of minimizing the incidence of bovine piroplasmosis, we conduct research to 1) determine the current status of bovine piroplasmosis in Japan and other endemic countries; 2) identify tick vectors transmitting bovine Theileria, and thereby establish systematic tick-control measures; 3) determine immunological responses against Theileria infection in cattle and develop vaccine; 4) clarify the mechanisms by which Babesia invades erythrocytes with the objective of vaccine development; 5) establish effective techniques and tools to analyze the genetic polymorphism in vaccine candidate antigens; and 6) develop made-to-order type subunit vaccines effective in different endemic regions. To expedite our aim of eliminating bovine piroplasmosis, we maintain a strong international collaborative network and accept postgraduate students and young postdoctoral researchers for the development of human resources in countries where bovine piroplasmosis is endemic.

We focus on oxidative stress responses, redox (oxidation/reduction) signals, and calcium signals in malaria protozoan cells. Living organisms adjust various physiological functions by altering the oxidation-reduction balance and calcium oscillation. We focus on “watching cells” and “imaging experiments” to understand the said systems and the roles of molecules that function in the systems, using malaria protozoa as a model organism.

We are developing technology to manipulate genes using Babesia. So far, we have developed a foreign gene expression system (green fluorescent protein-expressing protozoa) and a gene knockout system, and we are currently trying to use live imaging to clarify the mechanism of the said protozoa’s growth and infiltration n the red cells and the vector tick.

Japanese bilharziasis is a zoonotic disease that prevails in rural areas of Asian countries, and is closely related to rural health and sanitation and livestock sanitation. We conduct serum-epidemiological surveys using the newly developed ELISA protocol in regions of the Philippines where Japanese bilharziasis prevails, and conduct comprehensive epidemiological surveys including the survey on population genetics of the parasite and the search for reservoir hosts in endemic areas. 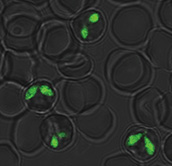 Developmental-stage conversion (or cell differentiation) is essential for trypanosomes to parasitize mammalian hosts and vectors. Therefore, we aim to reveal the stage conversion mechanisms using gene manipulation technology, with the aim of developing new control strategies for trypanosomoses.

We aim to establish effective control strategies for trypanosomoses in endemic countries based on field surveillance data. In addition, we intend to isolate and establish field strains of trypanosomes for further study.

Research Unit for Infection and Pathology

Toxoplasmosis is a zoonotic disease latently infecting 20% to 30% of the world’s population. Toxoplasma causes serious problems in immune-suppressed people such as HIV patients and the elderly as well as in congenitally infected infants. This laboratory is working on unraveling the mechanism of Toxoplasma’s parasitism in hosts.