Surra and other animal trypanosomoses

Surra is a disease caused by Trypanosoma evansi in domestic and wild animals. Dourine is a disease caused by T. equiperdum in equines, including horses, donkeys and mules. In addition, animal African trypanosomosis (AAT) is caused by T. brucei brucei, T. congolense, and T. vivax in domestic and wild animals in sub-Saharan African countries. The taxonomy and species classification of Trypanozoon trypanosomes (T. brucei brucei, T. evansi and T. equiperdum) are still controversial topics. Several parasitological, serological, and molecular diagnosis methods have been developed; however, current diagnostic tools are difficult to distinguish these Trypanozoon trypanosome species in single diagnostic method. Therefore, it is sometimes difficult to quickly identify the causative trypanosome species and disease in case of trypanosome infection in equine. 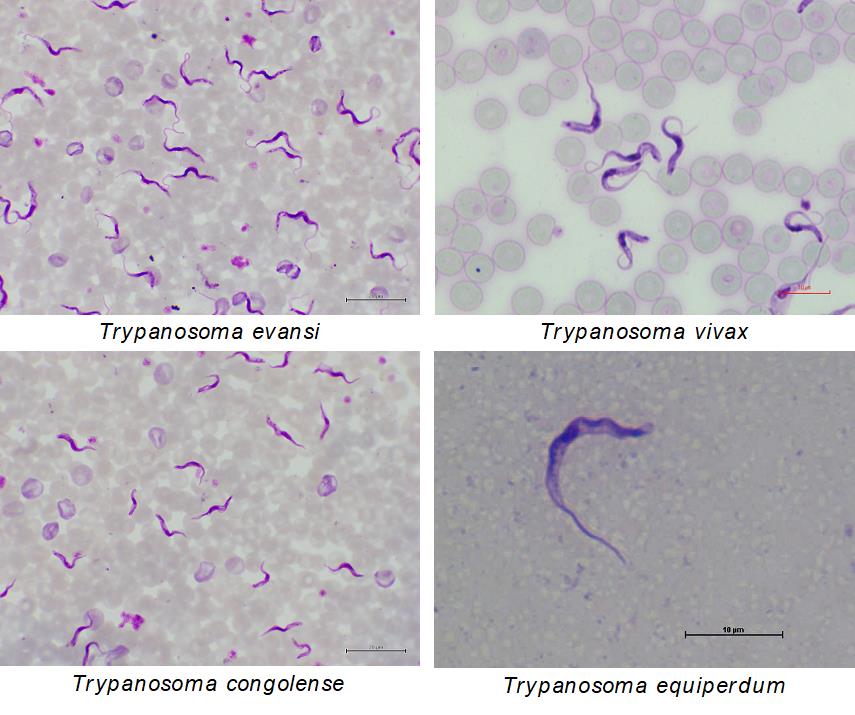 Surra has a worldwide distribution. Once, Dourine was also worldwide-distributed, but currently the disease was only reported in few African, South American and Asian countries. While, AAT is distributed in sub-Saharan African countries in accordance with habitat of their vector, tsetse fly (Glossina spp.). As an exception of AAT, the disease caused by T. vivax is also distributed in South American countries because it is transmitted both biologically by tsetse and mechanically by blood sucking insects and vampire bats.

The lifecycles of T. evansi and T. equiperdum are simple: These trypanosomes propagate in blood stream or tissue lesions in their host as blood stream trypomastigote form (BSF). These BSFs are mechanically transmitted to a new host by blood sucking insects (T. evansi) or by coitus (T. equiperdum).

The lifecycle of animal African trypanosomes is more complex. These trypanosomes propagate in blood stream as BSF. In case of T. b. brucei, two different shapes of BSF are observed: long-slender form (LS) that can propagate in host blood stream and short-stumpy form (SS) that cannot propagate in host blood but ready for cell differentiation to the procyclic trypomastigote form (PCF) in the tsetse midgut. BSFs of T. congolense and T. vivax can be morphologically distinguished. Tsetse fly uptakes the BSFs in their blood meal from the infected animals. BSFs of T. brucei develop into PCF and propagate in midgut. PCFs develop to epimastigote form (EMF) with migrating to the salivary gland where EMFs get attached to the salivary gland epithelium.  EMFs finally develop to infective metacyclic trypomastigote form (MCF) and MCFs. These infective forms are injected into the mammalian host along with the saliva on biting.

The stage development of T. congolense and T. vivax in tsetse flies are different from that of T. b. brucei:  In case of T. congolense, BSFs develop to PCFs in midgut like as in T. b. brucei and after movement and development from PCFs to EMFs, EMFs propagate on hypopharynx in proboscis and finally develop MCF in the same region. On the other hand, in case of T. vivax, whole cyclical development is completed at tsetse proboscis.

The clinical stages of Surra and AAT are classified into two stages: In the 1st stage, BSFs propagate in blood stream with non-pathognomonic clinical signs such as anaemia and fever. In the 2nd stage, BSFs invade the central nervous system with neurological signs, paralysis, ataxia, emaciation, and eventually death. 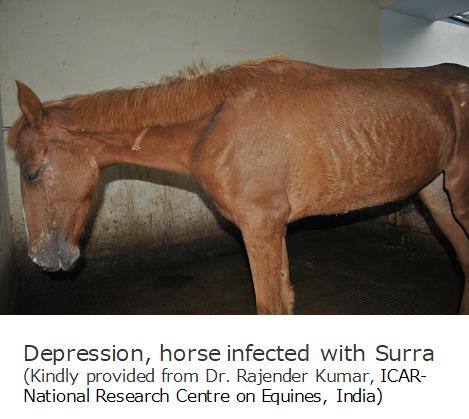 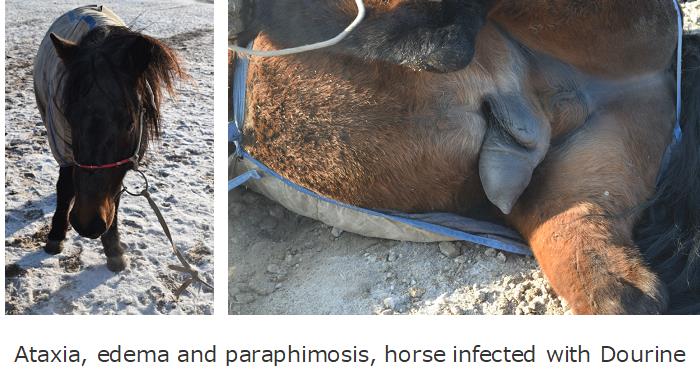 Animals recovered from acute infection and with subclinical infection may become chronic carriers, which act as source of infection.

Microscopic examination of Giemsa stained thin or thick smear specimen or wet smear method are simple and gold standard methods for detection of BSFs in peripheral blood or cerebrospinal fluid when the animal show high parasitemia (usually over 105 – 106 cells/mL). Trypanosomes, including Trypanozoon, T. congolense and T. vivax, can be identified based on their morphology; however, we cannot morphologically differentiate between T. brucei brucei, T. evansi and T. equiperdum, which belong to subgenus Trypanozoon. To increase sensitivity, hematocrit centrifugation techniques (Woo’s technique or Murray’s technique) are also applicable. Actively moving parasites can be observed on buffy coat and the lower detection limit can be improved up to 103 – 104 cells/mL using these concentration techniques. Using anion exchange column, BSFs can be separated from blood cells and can be concentrated more.

Up to date, only six drugs, diminazene aceturate, homidium bromide/chloride, isometamidium chloride, quinapyramine sulphate/sulphate:chloride, suramin and melarsomine dihydrochloride, are commercially available and applied for the treatment and/or prophylaxis against Surra and AAT. These drugs can treat the infected animals when they are in the 1st stage because these drugs cannot cross the blood-brain barrier.

On the other hand, the effective treatment measures are not yet developed for Dourine; therefore, the only effective control is through the slaughter of infected animals.

BSFs express variant surface glycoproteins (VSGs) on their cell surface and evade from host immune responses by randomly and frequently changing expressed VSGs. Therefore, vaccines are not yet developed.

In case of Surra and AAT, vector control is an important prevention measure, as it disturbs the parasite transmission. The sterile insect technique (STI) has successfully helped in tsetse flies and trypanosomosis eradication in Zanzibar Island in United Republic of Tanzania. The improvement of animal productivity has been reported after the complete eradication of animal trypanosomes in the island. Currently, STI is conducted in several African countries to eradicate tsetse flies and trypanosomoses; however, it is difficult to control the disease in wide area.