Bovine babesiosis is a disease of cattle caused by species of genus Babesia. The Babesia species infecting cattle include Babesia bovis, B. bigemina, B. divergens, B. ovata, B. major, B. occultans, and several unclassified species, such as Babesia sp. Mymensingh and Babesia sp. Hue-1. However, only four among them, including B. bovis, B. bigemina, B. divergens, and Babesia sp. Mymensingh, are known to cause clinical bovine babesiosis. The bovine Babesia species were sometimes detected in non-cattle hosts, such as buffalo, small ruminants, and camels. However, it is unclear whether these host animals, except for buffalo, play any important roles in the epidemiology of bovine babesiosis.

Bovine babesiosis has a wide distribution (Fig. 1). Babesia bovis and B. bigemina are widespread in tropics and subtropics, while B. divergens is endemic in Europe and some African countries. The recently discovered Babesia sp. Mymensingh was detected in cattle in Asian, African, and South American countries. Only a few countries, such as USA, Canada, Northern Europe, Japan, and New Zealand, are known to be free from clinical bovine babesiosis. 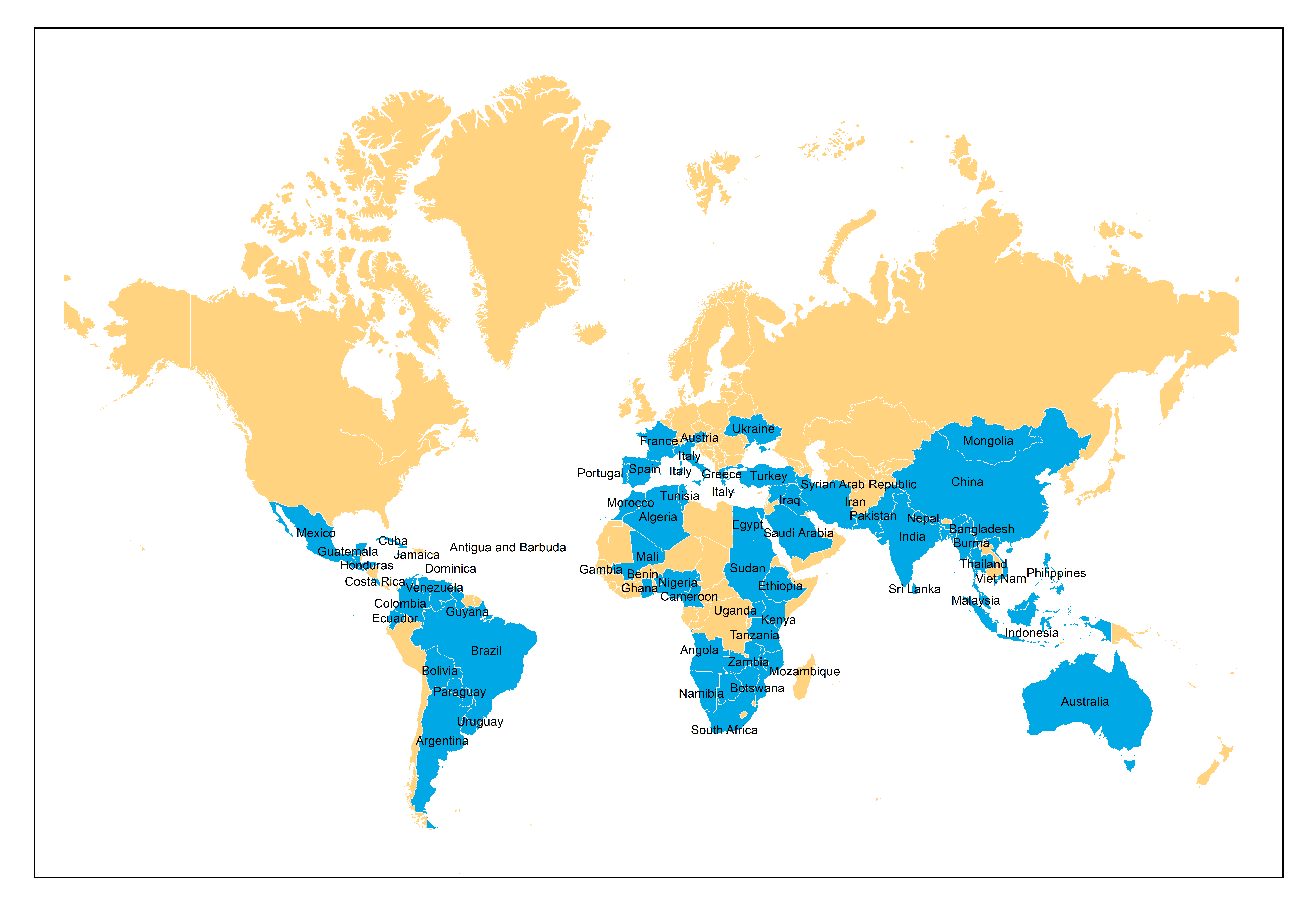 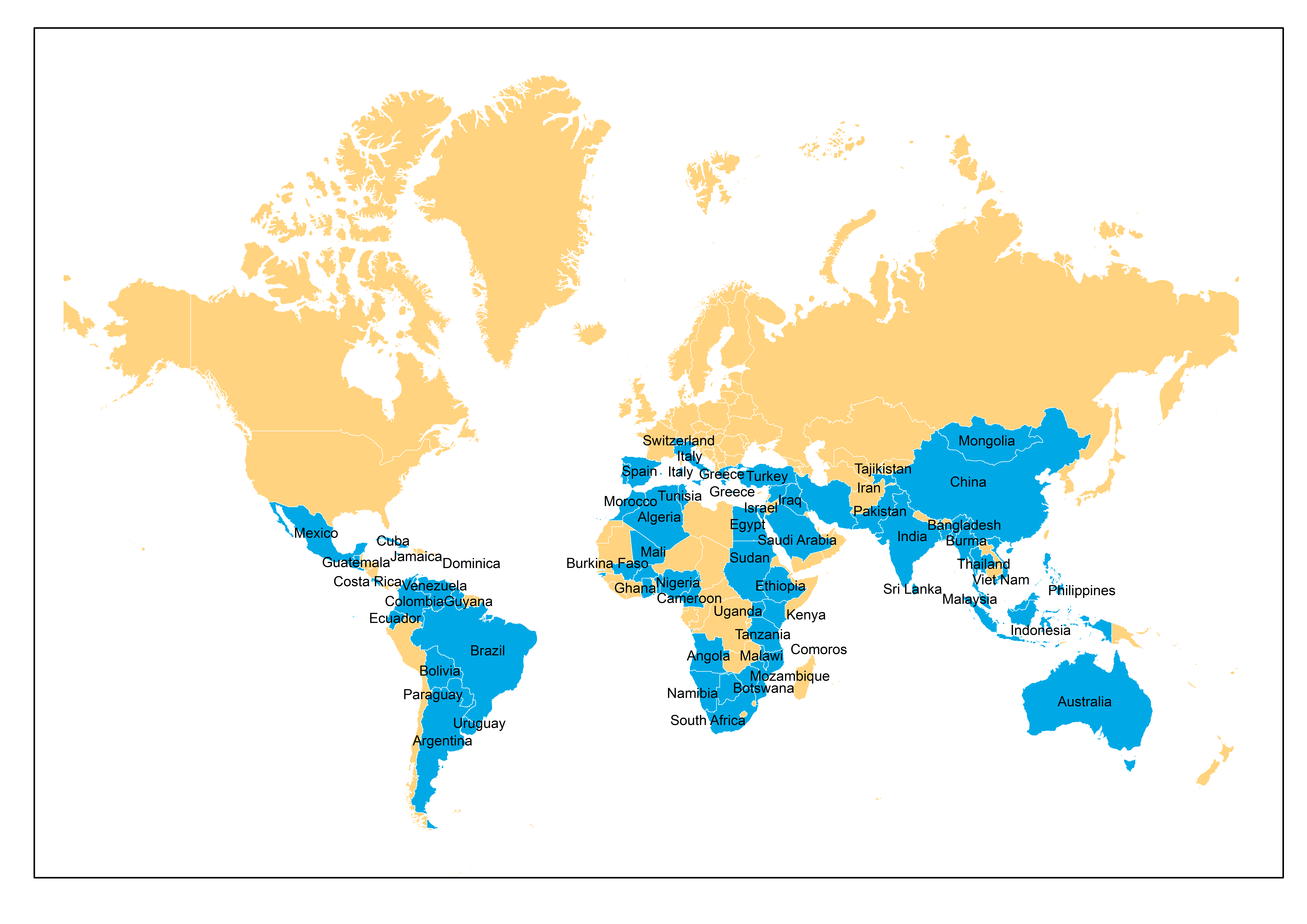 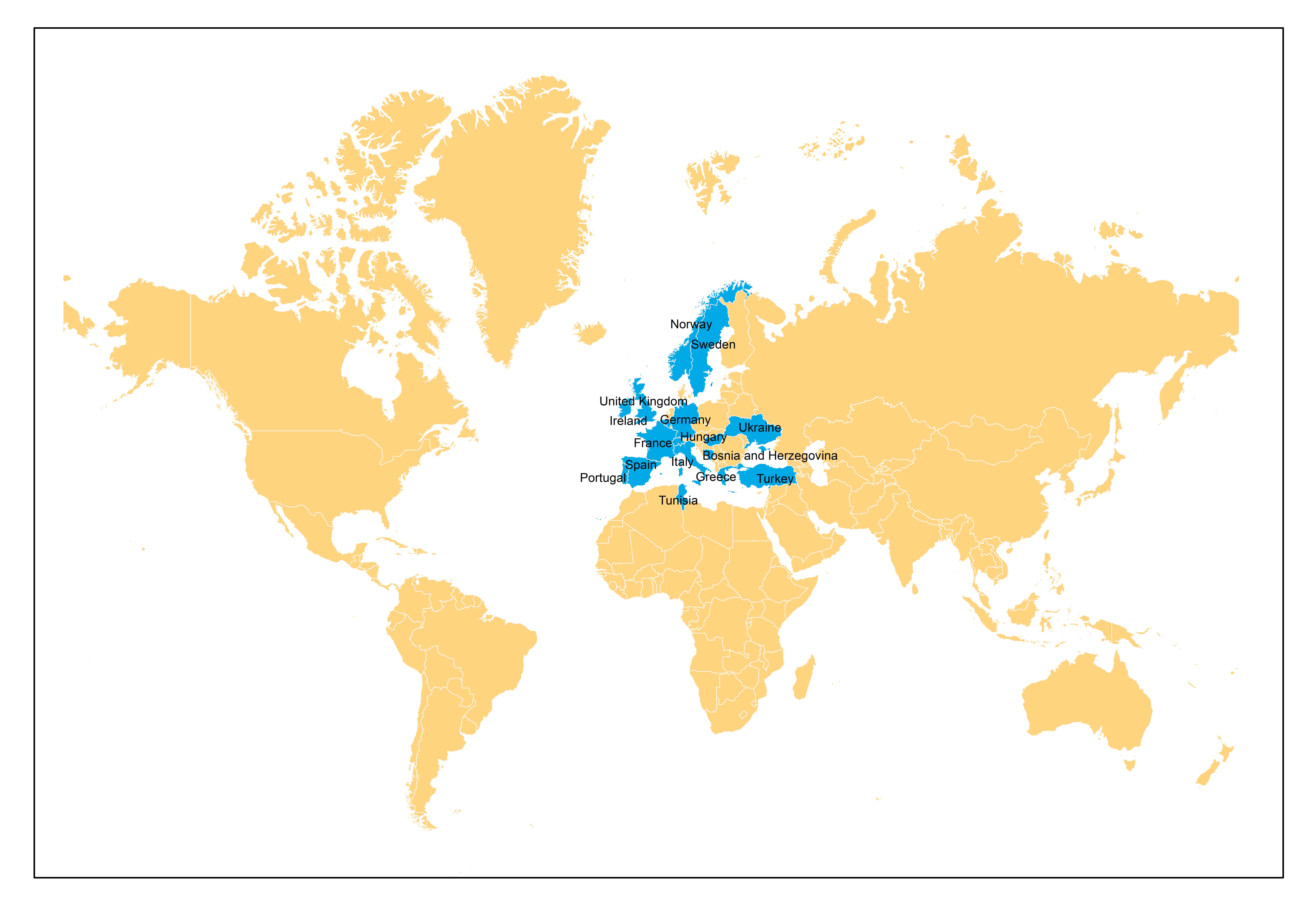 Fig. 1. Epidemiological mapping of bovine babesiosis. The countries, in which B. bovis, B. bigemina, B. divergens, and Babesia sp. Mymensingh were detected, are highlighted in blue. Click on the maps for larger images.

The lifecycle of bovine Babesia species involves mammalian hosts and tick vectors. The Babesia sporozoites injected into host’s blood during the blood feeding of infected ticks invade red blood cells (RBCs), where they transform into tophozoites, which multiply and produce merozoites.  After egress, the merozoites infect uninfected RBCs and continue to multiply. Some of these merozoites transform into gametocytes, which are ingested by the ticks, together with merozoites, during their blood meal. In the tick midgut, gametocytes develop into gametes, which fuse together during sexual reproduction and form zygotes. The zygotes developed into kinetes, which reach several organs, including salivary glands and ovaries, via hemolymph. The sporozoites of B. divergens are produced during sporogony in salivary glands and injected into blood, when the subsequent tick stages feed on the hosts (transstadial transmission). The kinetes of B. bovis and B. bigemina in ovaries of adult female Rhipicephalus ticks are transmitted to their eggs (transovarial transmission) and produce sporozoites in the larval stage. Babesia bovis is transmitted to cattle during the bite of these infected larvae, while B. bigemina is transmitted by nymphs and adults emerged from them.

The infections with Babesia species may result in clinical or subclinical bovine babesiosis. The massive intravascular hemolysis during acute infection results in anemia and related clinical signs, which include fever, hemoglobinuria, anemia, jaundice, and increased respiratory and pulse rates (Fig. 2). In addition to these clinical signs, B. bovis infection might be characterized by neurological and respiratory disease syndrome due to sequestration of B. bovis-infected RBCs in capillary beds. The cattle with severe clinical babesiosis may die if the treatment is delayed.

The infection with Babesia species does not necessarily result in clinical bovine babesiosis. The outcome of infection largely depends on several risk factors, including age, immunity, management practices, endemic stability, and cattle breed. Young calves less than nine months old are resistant to clinical babesiosis due to early innate immune responses, such as production of nitric oxide, whereas the adults are not. Despite the absence of clinical disease, the infected calves develop immunity, which protect them from clinical babesiosis, when they receive the infection as adults. If cattle herds are managed extensively, most of the animals get infected and acquire the immunity when they are young. This situation is known as “endemic stability”, and under this setting, there will be few or no clinical cases. Cattle breed may also be a risk factor for bovine babesiosis. In general, Bos indicus cattle are relatively resistant to clinical babesiosis, compared to Bos taurus animals. The strategies for the control of bovine babesiosis should be designed in light of these risk factors.

Subclinically infected animals and animals recovered from clinical babesiosis become carriers, which act as source of infection. Animals infected with B. bovis remain carriers for a prolonged period, whereas B. bigemina might be cleared with time.

Laboratory diagnosis of bovine babesiosis is important, as the clinical signs are not pathognomonic. The diagnostic assays for bovine babesiosis can be divided into agent identification and sero-diagnostic tests. The commonly used agent identification tests include microscopy and DNA detection methods. Microscopic examination of Giemsa-stained thin blood smears is useful for demonstrating the parasites within RBCs. Morphological features of bovine Babesia parasites, such as size, angle between the paired merozoites, and location within RBCs, are useful for the species identification. Based on the size, Babesia species can be divided into small and large types. Babesia bovis and B. divergens are small parasites, and the angle between paired merozoites of these two parasite species is usually obtuse (Fig. 3). However, B. divergens can be differentiated from B. bovis by its peripheral location and Maltese-cross formation. On the other hand, B. bigemina and Babesia sp. Mymensingh are large parasite species, which can be differentiated based on the angle between paired merozoites; B. bigemina and Babesia sp. Mymensingh form acute and obtuse angles, respectively (Fig. 3). Despite being the gold standard technique, the microscopy is, however, less sensitive, and therefore not suitable for detecting asymptomatic carriers with very low parasitemia. In addition, differential diagnosis of Babesia species by microscopy requires considerable expertise.

Therefore, the DNA detection methods have replaced the microscopy in epidemiological surveys. In the recent past, highly sensitive and specific polymerase chain reaction (PCR), nested PCR, real-time PCR, and loop-mediated isothermal amplification assays have been developed based on several target genes, such as 18S rRNA, AMA-1, RAP1, and β-tubulin.

Serological tests are used to demonstrate parasite-specific antibodies in sera from infected animals to determine the rate of exposure rather than the current infections. Indirect Fluorescent Antibody Test (IFAT) using slides prepared with Babesia-infected RBCs is useful for detecting anti-parasite antibodies. However, the IFATs have been replaced with Enzyme-linked immunosorbent assays (ELISA), because of the cross-reactivity between B. bovis and B. bigemina. The ELISAs for sero-diagnosis of bovine babesiosis have been developed using recombinant forms of RAP1 (B. bovis and B. bigemina) and Bd37 (B. divergens) antigens. Moreover, competitive ELISAs based on RAP1 antigens have been developed and validated for the sero-diagnosis of B. bovis and B. bigemina. ELISA for detecting Babesia sp. Mymensingh antibodies has not been developed yet.

Early treatment is essential for recovery. Currently, anti-protozoan drugs, such as diminazene aceturate and imidocarb dipropionate, are widely used for treating bovine babesiosis. However, side-effects may be associated with the current therapeutic regimens. In addition, emergence of drug-resistant strains may also be a limitation, as a recent in vitro investigation found that B. bovis may develop transient resistance to diminazene aceturate.

Once infected with Babesia, the cattle develop a long-lasting immunity, which protect them from clinical babesiosis during re-infection. Based on this phenomenon, live-attenuated vaccines are sometimes used in endemic countries to immunize susceptible cattle against B. bovis and B. bigemina. These parasite species can be attenuated by passaging the isolates through splenectomised calves. After several passages, the attenuated strains are obtained. Blood from the splenectomised calves or RBCs from in vitro cultures infected with these attenuated strains are used as vaccines. A wide use of live-attenuated vaccines is, however, limited due to several reasons, such as strain-specific immunity, prolonged production procedures, and risk of co-transmission of other blood pathogens.

Tick control is an important preventive strategy, as it disturbs the parasite transmission. However, development of acaricide resistance may impair efficacy of tick control methods.